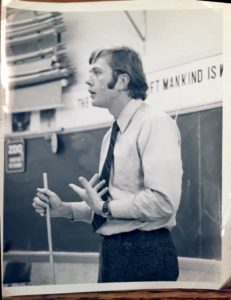 As part of my Gratitude Project I wrote the following letter to Mr Robert E Hines  which I share with his permission. It’s dated 2 June 2018.

Great teachers teach beyond than their subject matter.  They impart life lessons to their students. Students may be deaf to this other lessons because they were focused on the quiz in chemistry which followed the history class. Or maybe their teenage angst over some social snub distracts them for listening.

I feel fortunate to have experienced your classroom. As a student of yours during two years of history classes I came away with more than the significance of 1066, Dr Pepper moments, and writing a well-constructed essay. Here’s a short list and I follow with a memory associated with each item:

While I heard “life isn’t fair” numerous times before your class, somehow this finally sunk into my teenage mind. Perhaps you recognized that teenagers pout even more so then little children as they declare “that’s not fair.”  Perhaps the topics covered in World and European history gave plenty of examples that “life isn’t fair.” In our informative teenage years, we all wish that life was fair and yet history shows us again and again that well it isn’t.  Life is unfair to all of us even the famous have unfair things happen.  Having a teacher in a matter of fact manner state “Life isn’t fair” as opposed to the shouting tone that a parent may respond with to a child made it easier to finally learn.  The lesson I really learned though went beyond that declaration. Life is life and what happens may not seem be fair. But if we look upon the event with a different viewpoint it may not be so bad. The Taoist story about the man, his son and a spirited horse so aptly illustrates this viewpoint Life is unfair- just know it and move on.  It’s not about getting over it or dwelling on, it’s about moving through it.  Countless years of human existence shows that life goes on.

In the fall of 1978, something happened after school that impacted our classroom, World History. No one really talked about it, there was a subtle unspoken shift. Months after the event you decided to say something about this shift. “Class, have you noticed that no one has sat in Conrad’s chair.” Conrad Zharko ran on the cross country team and that fall a car hit Conrad after practice. He died as a result. I recall there was very little said about the event. Now a day the school would have made arrangements to have extra counselors available to discuss the death. You chose to point out our unspoken response to Conrad’s death.  By naming it, speaking it, it became more real. Vaguely, decades later I recall how startled I was about the observation. It is only now that I have experienced the death of close loved ones that I comprehend the behavior. Yet I still find it hard to articulate it but I’ll try here—in death we desire to pay respect to the person. If we sat in Conrad’s chair that would mean he really was no longer with us. Our 16 and 17-year-old souls weren’t ready to accept it.

For Advanced Placement European History, you provided us a list of potential topics for our term papers. You also stated we could suggest a topic. As I knew very little about Lithuania from which my father’s mother’s side of the family came from I about Lithuania. Having doubts you said “I don’t think you can.” Yet you followed with “But if you can define something specific I’ll consider it.” I knew Lithuania had a brief two decades of independence before being absorbed back into mother Russia as part of the USSR. I went to a college library and scrolled through microfiche of magazines from the 1920’s and found two topics. One related to the disagreement between Germany and Lithuania regarding a city on the Baltic Cosat. The second topic concerned the redrawing of the demarcation between Poland and Lithuania. Poland essentially stole Vilnius, the ancient capital of Lithuania. I chose Vilnius, you approved and I researched.

I spent hours reading news stories from the 1920’s about the Polanization of that region of Lithuania. I went to the US National Archives and requested documents from the embassies with reports about the lines.  I saw the maps that redrew the lines. It confirmed what my Dad said about his Grandma Schrader who emigrated as a young woman to the coal mining towns of Western Pennslvannia.  She instructed her children to never attend the Polish Catholic Church. Years later I recall telling a work friend about someone telling me “No not now.” It was something I really wanted to do and I couldn’t fathom why I needed this person’s approval. Dennis observed “Well, Anne I know you. Telling you “no” only makes you want to do it more.” And just like my quest to write a long history paper about Lithuania I went on to do it.

From keeping in touch with you over the decades I know you have taught other teachers and aspiring teachers your wisdom on engagement in the classroom. I know that this is your last semester as a school teacher in the Montgomery County system. You have had a career well spent in educating the decades of students from which I and my three siblings (Margaret, Joan and Thomas) have benefited. I will close with the following:

Thanks for the lessons that enable me to rise to every challenge and forge through the unfairness that just happens in life.

Dear Reader, please share your comments and stories that are sparked by this piece. Has there been an influential school teacher in your life?  What did they impart to you? See Contribute for how you can share a story at The Engineers’ Daughter.

A version of the Tao story regarding the man, his son and the spirited horse can be found here.

For more on the Lithuania/Poland disputed over country borders and Vilna/Vilnus read this article.  A personal note, Wojciech Maly’s mother studied at a univeristy in Vilinus.  As my PhD advisor while we didn’t discuss this topic much, my mother raised the subject when she and my father visited me at my grad school office.