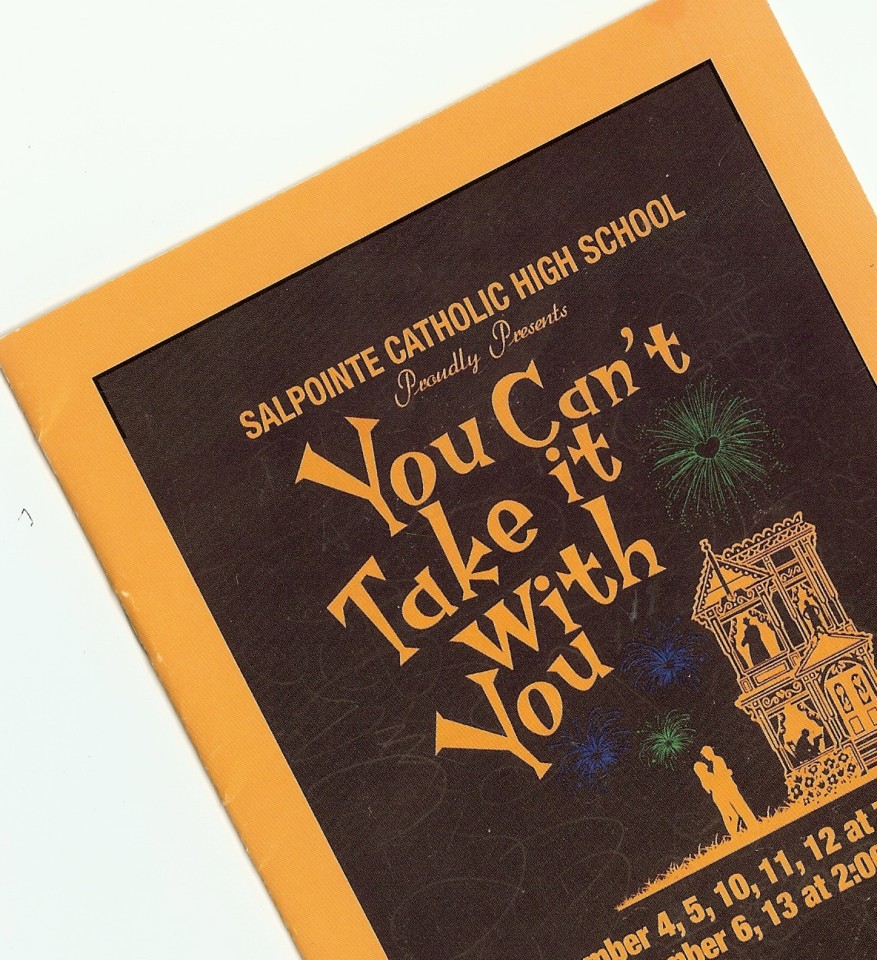 Last fall I arranged a visit in Tucson, Arizona to visit my brother and his family. My nephew, Sean, would be appearing in his high school’s production of Moss Hart and George S. Kaufman’s “You Can’t Take It With You.” Though he had a small part as one of the G-men, it created a lovely excuse for this trip. The well-performed play reminded me that valuing your time spent trumps the value your time generates.

The play’s synopsis: It’s 1936. All action takes place in the Martin Vanderhof residence in New York City. Tony Kirby, from a rich family, becomes engaged to Alice Sycamore, from the good natured–but decidedly eccentric–Vanderhof family. The play’s conflict centers on the contrasting life styles of the two families. In the end, the girl gets the boy. Along the way the play, via its characters, provides ample advice on living life. In addition, the play subtly raises the question regarding societal expectations of the individual.

Working as a secretary, Alice leads the “normal” existence in her family. Her family members work by pursuing their interests. Grandpa Vanderhof visits the zoo, practices darts and has a pet snake. Her mother writes plays, her father concocts fireworks with Mr. De Pinna. Her sister, Essie, makes candy and dances ballet. Essie’s husband, Eddie, likes to print. He’s agnostic as to what he prints as long as it is short. He tucks these printed sayings into the boxes of Essie’s candy that he delivers around the neighborhood.

Alice has doubts about marrying Tony, due to their family differences. She describes her attachment to her family:

“I love them, Tony…I love them deeply. Some people could break away, but I couldn’t. I know they do rather strange things…But they’re gay and they’re fun…and, I don’t know…there’s a kind of nobility about them.”

Throughout the play Kolenkhov, Essie’s Russian ballet teacher, announces the latest news from the Soviet Union based upon letters from his friend. Also in the background, the matter of Grandpa Vanderhof’s income tax interrupts the family. The IRS letters regarding Grandpa’s non-payment of income tax have gone unanswered. An agent arrives and a discussion ensues on why taxes should be paid. Grandpa wants to know what he is getting for his money:

“Last time we used battleships was in the Spanish-American War, and what did we get out of it? Cuba—and we gave that back. I wouldn’t mind paying if it were something sensible.”

As a retired businessman, Grandpa has maintained his frugal sensibility. He has also gained perspective on life. This exchange with Kolenkhov could be taken as his manifesto:

Grandpa: Oh, the word’s not so crazy, Kolenkhov. It’s the people in it. Life’s pretty simple if you just relax.

Kolenkhov: How can you relax in times like these?

Grandpa: Well, if they relaxed there wouldn’t be times like these. That’s just my point. Life is kind of beautiful if you let it come to you. But the trouble is, people forget that. I know I did. I was right in the thick of it…regular jungle. One day, it just kind of struck me, I wasn’t having any fun.

Kolenkohov: So you did what?

Grandpa: Just relaxed. Thirty-five years ago, that was. And I’ve been a happy man ever since.

The engagement of Tony and Alice leads to a dinner between two the families. Knowing the eccentricities of the family household, Alice has been fretting about everything from the menu to the décor. So much so that Grandpa astutely remarks, “They are going to get the wrong impression of this family.” Tony, though, has a different idea and brings his parents one night early for dinner.

Mr. and Mrs. Kirby stiffly manage conversation while Penny Sycamore requests that someone run out to the A & P for some groceries. While waiting, the contrast between the two families amplifies during a word game. With their increased discomfort, the Kirbys announce they will leave before dinner. The FBI interrupts their egress with a raid. Eddie’s sayings have been deemed threatening–“God is the State,” “The State is God,” “Bomb the White House.” The fireworks in the basement confirms the threat. Everyone is jailed overnight.

This event creates a crisis of faith for Penny and Paul Sycamore, Alice’s parents:

Penny: I can’t help it Paul. Somehow I feel it’s our fault.

Paul: It’s mine more than yours, Penny. All these years I’ve just been—going along, enjoying myself, when maybe I should have been thinking more about Alice.

Penny: But we’ve been so happy, Paul.

Paul: I know, but maybe that’s not enough. I used to think it was but—I’m kind of all mixed up now.

Alice has broken off the engagement, quit her job and plans to get away from it all with a trip to the Adirondacks. She refuses to talk to Tony, who has come to the house to convince her marry him. His father, Mr. Kirby, has come for Tony. There’s a long exchange between Grandpa and Mr. Kirby on work and happiness:

Grandpa: Yes. Mixed up and unhappy the way you are.

Kirby: I beg your pardon, Mr. Vanderhof. I am a very happy man.

Grandpa: I don’t think so, what do you think you get your indigestion from? Happiness? No, sir. You get it because most of your time is spent in doing things you don’t want to do.

Kirby: What do you expect me to do? Live the way you do? Do nothing?

Grandpa: Well, I have a lot of fun. Time enough for everything—read, talk, visit the zoo now and then, practice my darts, even have time to notice when spring comes around. Don’t see anybody I don’t want to, don’t have six hours of things I have to do every day before I get one hour to do what I like—and I haven’t taken bicarbonate of soda in thirty-five years. What’s the matter with that?

Kirby: I am not aware of missing anything.

Grandpa: I wasn’t either, til I quit…what’ I’m trying to say, Mr. Kirby, is that I’ve had thirty-five years that nobody can take away from me, no matter what they do to the world. See?

Kirby: Yes, I do see. And it’s a very dangerous philosophy, Mr. Vanderhof. It’s –its’ un-American. And it’s exactly why I’m opposed to this marriage. I don’t want Tony to come under its influence.

Tony: What’s the matter with it, Father?

Kirby: Matter with it? Why, it’s–it’s downright Communism, that’s what it is.

The Vanderhof family remains content with their lives pursuing their interests and not bothering anyone. In the closing scene Grandpa offers the following prayer before dinner:

“Well, Sir, here we are again. We want to say thanks once more for everything You’ve done for us. Things seem to be going along fine. We’ve all got our health and as far as anything else is concerned we’ll leave it to You. Thank You.”

My friend Steve pointed out to me that the play also challenges who do you live your life for. In skewering both capitalism and communism, it subtly raises the point of an individual’s worth to society. If you don’t contribute directly to making money for a corporation or supporting a government’s economic plan, then for whom do you live? Perhaps another title for the play could be “Whose Life is it Anyway?”

Dear Reader, please share your comments and stories that are sparked by this piece. Has a movie, play or novel highlighted a life lesson for you? See Contribute for how you can share a story at The Engineers’ Daughter.