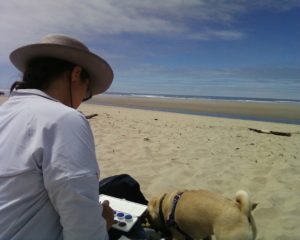 They tell me everyone grieves in her own way.  During my husband’s illness with pancreatic cancer I learned that a friend from graduate school had lost his son Sam to a car accident.  Though it had been many years since we had spoken, my heart sank. I knew that John dearly loved his children as his moniker in school had been “Max’s Dad;” hence, this would be a difficult loss.  Over a year later, after my husband’s death, we met.  I shared with John my own sad news and we discussed grieving.  The subject of books on grieving came up and John expressed disdain for most of the ones given to him.  However, his face lit up at mention of Joan Didion’s “The Year of Magical Thinking.” He said “That part about her husband needing his shoes when he returns” had struck a true chord with him.

In my case it was my husband’s truck, a pristine 1998 Toyota Tacoma.  After his death, I always saw it in the driveway first thing in the morning and last thing in the evening.  If his truck was still there so was Mike. It represented a piece of him in many ways: the fastidious of his persona- the truck immaculately  clean and unmarred, his love of apes- a stuffed white gorilla hanging from the mirror, the outdoorsman- his tent and fishing tackle ever ready in the back seat.  I can still picture him driving the truck- a baseball cap perched on his bald head, sunglasses on and a slight smile on his bearded mustached face as I yakked away.  He always drove us everywhere in this truck or my car.  I regret not having any pictures of him with the truck as its life was as long as our lives together.  Before relinquishing the truck to his sons, I took many pictures from all angles in hope that he would somehow magically appear.

No matter how expected a death may be, the protection that shock offers you during those first few days bewilders the mind.  I simply could not understand why I didn’t feel anything. Then my friend Karin stated “Anne, that’s shock it’s protecting you.” At least now there was a reason for why I could think straight as I and his sons planned the funeral.  The day after the funeral my friend Lisa and I drove out to the coast. She had never seen the Pacific Ocean and had offered a bit of art therapy at the beach.  As we brought along the dog, Layla, the water color session had many interruptions as she scampered around.  On the drive home the first inkling of emotional loss came upon me.  I had brought along a mixed tape I had given Mike our first Valentine’s Day, Feb 1999. Magically, I had stumbled upon it the previous day.  The love songs blared out as we chatted, but I stopped talking at the last one- Tracy Chapman’s “The Promise.”  Tears leaked out as Tracy sung of patience, love and longing.  The tape has been played many times since, even as I discovered other songs that teased out the emotions.

They tell me everyone grieves in her own way, but I believe we share similarities.  We let go in pieces; however, random or planned.  The memories stirred by the smallest sound byte, musical fragment or brief image.  Staying busy we can go on for days not leaving a moment for reflection.  But then, those moments descend upon us, transcend the space time continuum and transport us. Only then we feel the loss.

Have a lovely day,

Dear Reader, please share your comments and stories that are sparked by this piece.  For instance how have you worked through grief after losing a partner or other loved one?  See Contribute for how you can share a story at The Engineers’ Daughter.

I originally wrote this in 2009 one year after Mike’s passing.  I posted it to a social media site at work to which a number of fellow employees responded.  Since then I have shared it with friends and co-workers who have lost a loved one.  It is now 10 years after Michael Anthony Navarra died on 20 June 2008—summer solstice.

Joan Didion relayed her own journey of grief from her husband’s death, John Dunne with a raw honesty that both John and I identified with.  I actually read it during Mike’s cancer treatment.

My classmate John Cohn began his blog site  in response to his son Sam’s sudden death. John continues to blog almost daily where he shares “My life, loves and geekiness.” His family and friends created SamStones. “SamStones are made with love by Sam’s friends and family. Our intent with these stones is to pass on some of that love.”