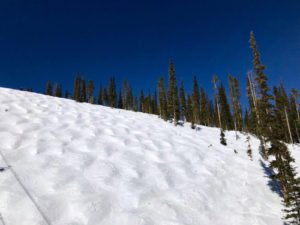 Dad only began ski lessons when his children began lessons. He had learned on the slopes with friends in the 1950’s. As an athletic young man he managed well enough. Mom mentioned that she had taken lessons when she took up the sport. The long trips to mountains north of New York City may have discouraged others from wasting the time in a lesson– not Mom.

My parents chose to marry in January 1961 to enable a ski honeymoon in the mountains of Vermont (link to first engineers daughter post). The pictures from the wedding show snow on the ground, toasts with libations and dancing. Years later, Mom told me that Dad had made sure to take dance lessons prior to the wedding. As most family members know my father has a tin ear and fails to sing in tune- just like Grandma Elizabeth (link to singing in tune post). Until recently, I had never thought about his sense of rhythm; I believe it is decent. The fluid swing of a bat, responding to your handball opponent’s hit, the beat of a runner’s feet on the track—these all have a rhythm. As a boy playing on the streets of Brooklyn my Dad learned these rhythms.

He found it harder to master the rhythms of skiing; the fluid movement of skis through the snow. Dad took lessons in his 40’s and 50’s and he persistently pursued that fluidity. One time he confessed that it took him 15 years to break all the bad habits he had accumulated from learning on his own. The instructors at Gore Mountain (link to that post) yearly chipped away at his habits. With each breakthrough my Dad would celebrate with “Wonderful, I get it” or  “Terrific.”

The Chatiemac and Hawkeye trails at Gore presented to my Dad the most difficult challenge to skiing with fluidity- moguls. Two months’ shy of his 60th birthday he smoothly skied down Chatiemac in a lesson.  He and the instructor both knew he had conquered it. Dad must have exclaimed one of his superlatives. His many lessons from professional ski instructors paid off when he met his ultimate goal—skiing down a mogul field with a confidence and fluidity.

In 1989 I received a package; he wrote “I decided to celebrate in the fashion of the time by making a T-shirt.” A white T-shirt had a picture of the mogul field and underneath simple lettering declaring “Dad, Conquer of Chatiemac-Hawkeye, March 22 1989.” I wore that T-shirt enough to have questions asked. My sister Joan had it incorporated into a quilt made from her various t-shirts

My father’s athletic pursuit of learning something new and becoming better has never ceased. When herniated disks prevented him from running he just swam on a more regular basis. This year as he approaches his 89th birthday he swims five days a week in the early morning. His new sport though is dance. 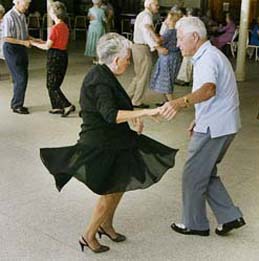 that existed in Montgomery County Maryland. The Archdiocese of Washington provided a Post-Canaan society made up of divorcees, widows and widowers. Once a month they held a dance. Dad noticed that the women often danced with each other. He decided to learn to dance.

The lessons from 1960 had long been forgotten. At the senior citizen center in Wheaton Maryland Dad found ballroom dance lessons. The center also hosted regular dances. In my phone conversations with Dad I heard, “But Anne dancing is really hard.” He chose to take private dance lessons with the instructor at the center. As with skiing Dad persistently pursues learning this new athletic activity.

I don’t know my Dad’s dance ultimate goal. I don’t know if it would take 20+ years like skiing. It doesn’t really matter though as what I do know from watching Dad is–  it is never too late to dance.

Dear Reader, please share your comments and stories that are sparked by this piece. See Contribute for how you can share a story at The Engineers’ Daughter.

Learn about snow sports instruction from a pro at the official PSIA and AASI site.

Dancing has many health benefits and is highly recommended for older people.