This was originally penned in 2010, and revised for The Engineers’ Daughter, I wrote this story and posted it on my company’s social media site.
As I hung up the phone with Salem, my friend and colleague, the beginning of a notion stirred in my mind. His year had been hard–full of personal loss–and with the losing custody of a foster child, his goblet now overflowed with heartbreak. My notion crystallized during my drive home that evening, resulting in a pronouncement: “He is worthy of a Henry.” I must explain: Henry is not short for a Weinhard beer, but is a hand-knit scarf. 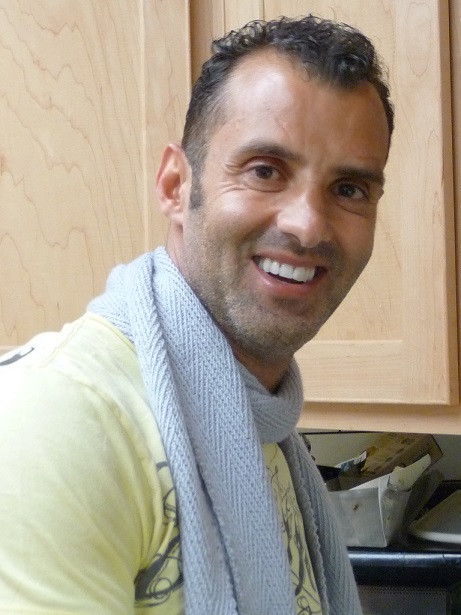 Begun in January with thoughts of my brother, I chose this particular pattern because it challenged me in a number of ways–new yarn- lace weight, and a slip knit pattern that required creating a scarf lengthwise. It soon became clear that the Henry would also be a major investment in time. Often people ask me “how long did it take you to knit that?” Almost never can I respond with the number of hours; typically I know when I began and finished a project. The Henry, though, was a rectangle some 400 stitches per row on a size 3 needle, so it’s a straightforward calculation, which I mistakenly figured out. At least 60 hours…perhaps as much as 100 hours, if I counted ripping out rows to fix a mistake.

My brother reminded me that he lives in Tucson, Arizona; hence, scarves are not much in demand. I concurred; we decided some fingerless gloves would come in handy for those nippy winter morning bike rides to work. This left me with a dilemma: what man would be worthy of the Henry? My late husband, Mike, would have certainly been worthy of the love represented by the time invested. The subject of knitted items and men being worthy is much talked about in the predominantly female knitting culture. In a sock class, one woman noted that, among her friends, they would classify men as hat-worthy, scarf-worthy, sock-worthy, or sweater-worthy. Each succeeding item represented an investment in knitting that corresponds to the investment in the relationship. In distinct contrast, there exists the myth that if you knit your boyfriend a sweater, he will leave you. Perhaps the demonstrativeness of a hand-knit item proves intimidating for some men.

Knitting as a craft represents an investment in time, skill and emotion. Why knit a sweater when you can buy one at Old Navy for less than the cost of the actual yarn? We knitters knit for the pleasure of seeing a ball of string turn into a beautiful item to b 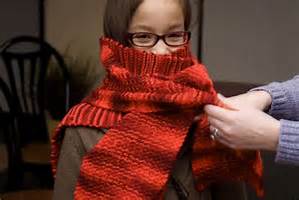 e worn. The resulting garment provides warmth, just as a hug provides warmth to a friend in need. We invest our time because it demonstrates the love and care we have for the recipient. In some cases the recipient may be a total stranger–be they a mile, or tens of thousands of miles away. Such is the case with the rise in opportunities to knit for charity. Examples from my own charity efforts include The Red Scarf Project and Afghans for Afghans. Sometimes we don’t know who the gift is for when we cast on. We simply wait for the destined recipient to appear.

When I started the Henry, the intended recipient did not work out. While I would like to think that I patiently waited for the right person; I must admit I complained. To the women in my knit night group, I asked, “To whom do I give this elegant scarf intended for a man?” I scoffed in response to the suggestion that I wear it–not my style. Deep down I knew it belonged to a man. In the end I learned it belonged to Salem.

The “why Salem” comes down to his having a particularly hard year full of personal loss and struggles. His litany included the following: ending a relationship, a tree falling on his house, his twin brother having a brain tumor, and the loss of his foster daughter, Sophia. I had knitted Sophia a lovely pink vest with a glittery button; and imagining her without Salem broke my heart. As an orphan in Salem’s home country of Tunis, she would return to a life of neglect. To top it off, as he decided to fight it in the courts in his home country, he was forced to come out to his parents. 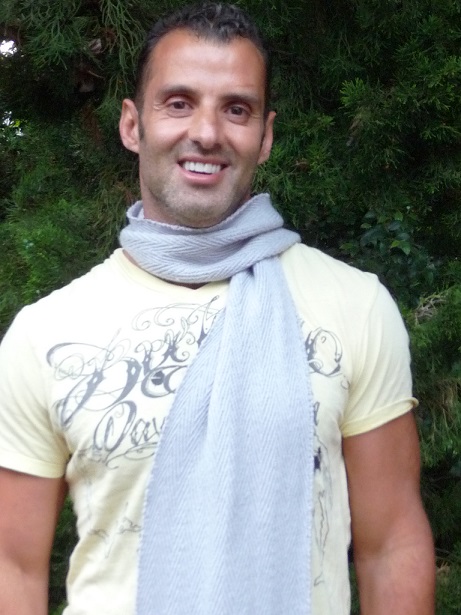 Salem works in another state; most of our working relationship has been done via email and on the phone, with the occasional face-to-face meeting. Hugs can’t be sent via the phone, but via the US Mail, I sent him a hug in the form of a Henry.

Epilogue: Salem greatly appreciated the scarf and wears it often. He stated it keeps him warm on those chilly mornings in Sacramento, California. In addition, he receives frequent compliments on the scarf, even when he is wearing his Prada. One could say that this is the ultimate compliment; however, it is the fact that he wears it frequently that warms my heart the most.

Dear Reader, please share your comments and stories that are sparked by this piece. For instance: how have you made a personal connection with a co-worker or schoolmate? See Contribute for how you can share a story at The Engineers’ Daughter.

Have a Productive Day,
Anne Meixner

Henry is a free pattern published in Knitty  You can check out comments made on Ravelry, a social network for all things yarn, string and fiber related.