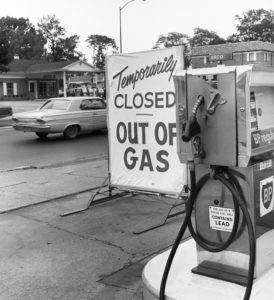 When you’re working for a big company, like Union Carbide, they will have a big project of interest. The management has certain goals they want you to achieve- –very specific business goals. They’ll assign you the engineers you might need. You have a defined budget you have to keep within. You begin work on the project with the assigned team.  However, what will often happen is though you’re making progress they cancel the project. Either the project may not be moving in the desired direction or it may not be moving with the speed that your senior management desires.

So management cancels that project and you’re assigned something else to work on. Oftentimes, what you’re working on next is not what you’d like to do. We can make recommendations what area may be good for a company, but in the end, your supervisor will assign you the project.  You do your best to carry out that assignment.

I was observing other engineers who had more control of their assignments. In fact, they had a contract outside of the company which meant they were bringing in business.  By business, I mean money.  In this situation, you have a fair amount of freedom with whom you want to hire, what direction you want to go. Oftentimes, when you make a proposal, you get help from other engineers as they too have an interest in this work. The good thing about working from outside is the company will respect you because you’re bringing money. Better yet, if the project you get is a technology that the company also has an interest in that has a huge benefit. They gain the knowledge without paying anything.

I started to pursue outside business.

One of my initial projects occurred during the Oil Shock of 1970’s. The US government wanted to make oil from coal. So, we made a proposal to Energy Research and Development Administration (ERDA which later became the Department of Energy) to remove sulfur from coal so that the oil will be sulfur free. We requested 300 million dollars to do this work over three years. About a year into the project, oil shock disappeared. As a result, oil prices went down; project got cancelled. Even outside contracts can be canceled. So on to the next one- solar cell development.

In 1977 the Jet Propulsion Lab (JPL) wanted to use a solar cell in space—reliable power source. They required a process to produce silicon for solar cells. Yet, they thought more broadly than space applications and requested operational commercial solar cells, i.e. the silicon would be made inexpensively. So, we made a proposal for the low cost solar array project.  At that time, Union Carbide had an electronics division which covered a range of products including producing semiconductor materials. More specific to the solar array contract, this division had a project for automatic pulling of crystal pulling for the semiconductor applications, such as Gallium Arsenide. Therefore, Union Carbide would have the double benefit of gaining knowledge and income from this low cost solar array project.

We got the contract. Yet we needed some of the work done in other divisions. So, I became a project manager and I assembled the engineers from other divisions.  I worked in Linde division located in Buffalo, New York. There were people who came from Plastics Division in West Virginia and Carbon Product division in Ohio.

As we didn’t have emails at the time, I found organizing all these people in different locations difficult. The key people, we had to bring to this one location. People from Plastics came, and Carbon product people came. We had an R&D center to include as well. We couldn’t do it by visiting two different sites and trying to have meetings. It was slow. Now it’s a lot easier because you have Skype and lots of ways of communicating with remote teams.  Eventually co-located to Vancouver, WA for one year.

Why move the team from Buffalo to Washington?

Simple- Cheap power. if you’re going to use this process to produce silicon material, you 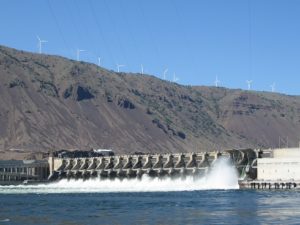 need lots of power and Pacific Northwest provided cheap hydro-electric power. Recall this project had the words “Low Cost” in its name.

As we decided to build the semi-works plant in Washougal, our key people–8 to 10 engineers– relocated to Vancouver. Phase 3 involved construction of a demonstration plant. We worked with CH2M Hill, an engineering facilities company, to design the plant for us. With this relocation we had the freedom to choose where we wanted to go to. We had the funding from ERDA which JPL managed and Union Carbide didn’t have managers controlling us. So they said, “Whatever you want!”

Now back to the actual project. While the original proposal was building a low cost solar array to make it commercial we realized we needed make cheap polycrystalline silicon to start with. So, we developed a Silane to Silicon manufacturing process to make the raw polycrystalline silicon. We licensed a silane to silicon process from Komatsu Electronic Metals Company which had the technology to deposit polycrystalline silicon from silane. However, the silane to silicon process at Komatsu was not yet fully developed, so I joined Komatsu engineers in Hiratsuka, Japan to complete the development. After the demonstration plant we built a commercial level plant in Lake Moses, WA per our plan.

So in the end, Union Carbide benefited from my creating my own work.

Dear Reader, what memory or question does this piece spark in you?  Have you worked on outside contracts with your company?  Do you have stories from working with cross functional teams? You too can write for the Engineers’ Daughter- See Contribute for more Information.

More from Hiroshi on additional benefits to company contract work:

We were ahead of the time because business wasn’t that great in terms of commercial solar cells. Anyway, we were very successful as a semiconductor silicon material supplier. Then what happened was, there was an accident in India– Bhopal Disaster 1984. Union Carbide’s chemical plant killed maybe 10,000 people, and Union Carbide paid 4 billion dollars to the Indian government. Financially they disbanded almost everything, sold off everything except Chemicals and Plastics Division and Industrial Gas Division. The company at the time employed about 120,000 employees. Eventually it went down to 20,000. So, all of us lost our jobs. But the good thing about it is we were getting money from outside and we were working with companies outside the organization. So we became consultants to the polysilicon business who purchased our technology. That’s the plus-side to downsizing because the whole thing got thrown out, and at the end, people who purchased the company needed people knowledgeable on our technology because they didn’t know as many things as unit developers.

For those who didn’t live through the Oil shock see this link for more information. US Department of Energy was formed under President Jimmy Carter in 1977.

There’s a fair amount of information about the silicon wafer process developed and the factory in Moses Lake still exists. Union Carbide sold this factory in 1985 Today, the original Moses Lake facility continues to produce high quality materials for use in both electronic and photovoltaic applications. While ownership of the enterprise has changed hands over the past thirty years, the basic process remains fundamentally unchanged as the leading technology for low cost and high quality.

Silane provided the starting material for what has become known as the Union Carbide Process to produce polysilicon ingot. Single crystal boules are pulled from it which is sliced into wafers. For some of the history on Komatsu read here.