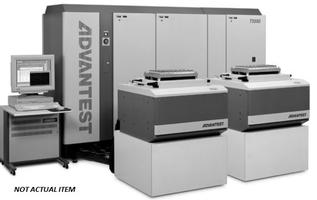 Neither Chris nor I knew much about the LOMAC tester; Fred as the equipment owner did. It sure would have saved some work if we had talked with Fred. This is a story of how doing things in an incremental fashion creates more work. Efficiency is one of the E’s of engineering; it often requires a holistic view to practice it.

rca 1985,) my manager, Phil, assigned me to work under Chris. Chris had a test chip which paired input and output circuits through a simple connection on the chip. As part of a Gate Array technology, they needed to be evaluated. Chris assigned me to make measurements on these circuits. The resulting data would be compared to the designer’s specifications (link to previous post.) In setting up the measurements Chris specifically requested that I measure VCC going to the test chip with every measurement. He mentioned that this can sometimes change.

The VCC value never changed. In hindsight, I surmise that Chris had this experience on a different measurement system. If only we had asked Fred. Only after I had programmed LOMAC and taken the measurements did I talk to Fred about my program. Fred informed me that the extra measurements were unnecessary due to capabilities of the tester. In general, power supplies on test equipment have less variation than the power supplies in a computer system.

Now I had 2X the data points in the resulting data; the measurement of VCC’s had to be filtered out. So I wrote another computer program to pull only the output measurements before I plotted the data. If only we had asked Fred, I would not have had to do this extra step.

Chris had a valid concern when he requested that VCC be measured. Understanding the LOMAC’s power delivery performance would have been a better first step instead of assuming the worst case. To practice Efficiency requires taking a holistic view, which necessitates finding out more than just the task in front of you. So, when I work with measured data, my first question has become: what’s the measurement capability of the system?

Dear Reader–What memory or question does this piece spark in you? Have you taken too much data because you didn’t see the big picture? What perspectives do you have on Efficiency and the holistic point of view? Please share your comments or stories below. You, too, can write for The Engineers’ Daughter– See Contribute for more information.

In the Mid 1980’s IBM had both CMOS and Bi-polar silicon processes.  The circuits evaluated here were bi-polar and used Emmiter Coupled Logic (ECL).

Oveview of ECL  Interesting to note that it was invented by an IBM engineer Hannon S. Yourke

ECL differs from the other popular circuit style called TTL

The output circuits evaluated were most likely push-pull style