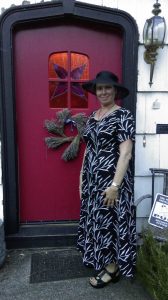 No one expected me to do this; especially my management because on 15 June 2015 they informed me that I met a formula– I was to be laid off.

There was a lot of emotional and intellectual confusion about this unhappy event. While they stated there was no expectation for me to come into work, I chose to come into work most of my remaining days.  I also chose to keep it a secret only telling a select few colleagues at work.  One reason- Broxton’s first silicon had arrived, and part of my working group chair responsibility was to manage the supply of silicon and the demand for its various flavors by the electrical validation engineering teams.

Other reasons existed and you’ll just have to wait for my memoir to be published to learn more.

As part of my processing the events I wrote an “early retirement” announcement.  I shared it on Intel’s internal social media platform—Inside Blue.

Am sharing it below with typos and grammatical errors, because six years later it speaks to who I am and what I accomplished at Intel.  Also, it shows my engineering heart, because as a ENFJ I lead technical teams with my heart and my brain.

I also published a four-part blog series called “Layoff Recovery Advice from a Widow and Test Engineer.”  I’m sharing a portion of the final blog in a LinkedIn article which I posted today regarding marking this anniversary of sorts.

So here goes and be patient with some of the emotional messiness as it was a challenging day when I finally wrote it.

“Every Strength is a Weakness and Every Weakness is Strength”

With the above quote in mind I have chosen to publish this announcement on the Intel Diverse Abilities Network Forum.  You see I have a disability; I recognize that we all do as human beings.

I realize this announcement catches you off guard.  Surprisingly my decision to leave came to me suddenly as well.  Personal and health reasons prompted this swift decision.

I have absolutely no regrets regarding my time, my work and my energy spent at Intel Corporation.  The people, challenging problems to solve, the culture (for the most part) have been an excellent place for me to grow as an engineer, technical leader, feminist, lifelong learner, philanthropist and mentor.  Simply put:

15 July will be my last official day.  Due to the swiftness of the decision and wanting to permit adequate notification the early retirement receptions will be held at a later point in time.  Most likely September time frame, when majority of Intel employees return from sabbatical.  To be alerted to these events, please join the “Oregon Technical Leadership Forum” as that’s the only place these events will be posted.  I have asked site owners to post the details once known.

Songs: poetry set to music can often express so much better than mere words.

As part of my eulogy remarks, I sang the following song at my Mom’s funeral in 2010.  I come from a long line of Irish American Working Women who knit.  As Maura O’Connell states in the youtube clip below- this song can be sung on any occasion.  If prompted I will this song at the drop of a hat.

I met Blaine Long as he sang at a Marriot Courtyard Chandler lobby one evening on a business in Chandler.  This is the album I bought two years ago- check him out. http://blainelong.com/audio/rose/

Last year I became enthralled with Karyn Ann when I heard her sing at my local farmers market. In 2006 The Hollywood Farmer’s Market recognized myself and my late husband Mike volunteers of the year.  Sadly he passed away in June 2008. Karyn Ann sings soulfully.  Attend her gigs in Portland or catch her when she travels.

I’d like to part with these “Picture Quotes” that I photographed at the Intel Museum attached to the Robert Noyce Building.  My friend Pat Pearson, from my snow sports circle was kind enough to create a collage. 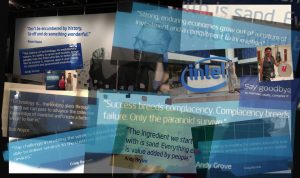 Roles, Responsibilities and Functions while working at Intel:

My late husband Mike Navarra (former Intel Employee) had these nicknames for me that have probably shown up during my tenure at Intel:

Strength Finder 2.0 results in order, so far the best description of me as a technical leader:

As a practicing Roman Catholic you should know this about me:

Walking the hall at Intel, those who don’t know me by name simply call me “Hat Lady”

Two words though describe me as a whole